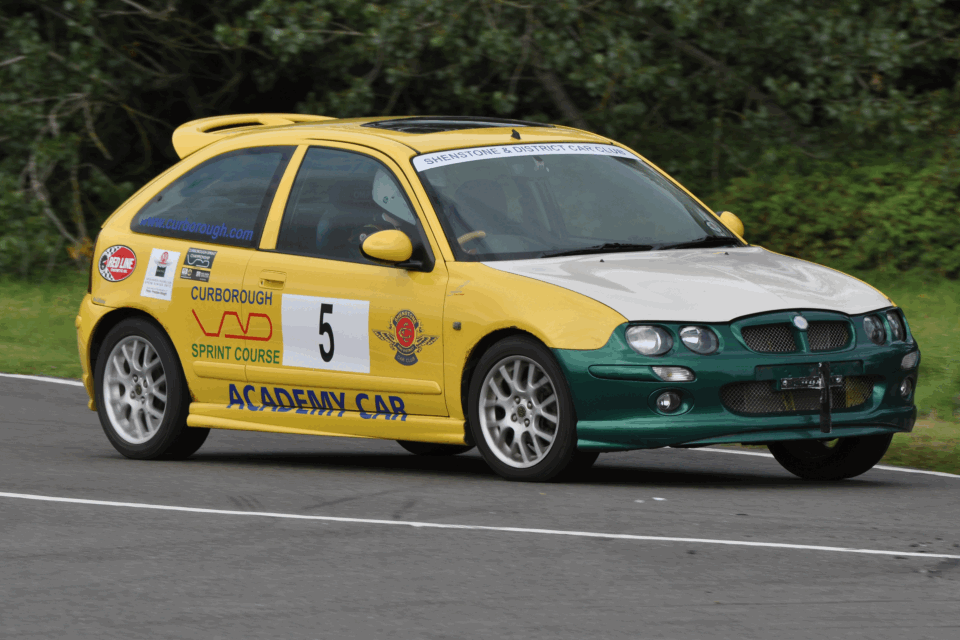 Shenstone and District Car Club Academy.
If you have been to Curborough and watched the events and thought you could give sprinting a go why not drive our MG ZR?

If you have been to the Introduction to Sprinting day and taken your car round with an instructor or if you have been to track afternoons and are sure you can do as well if not better than most, now is the time you can really test your skills against the clock and drive the Shenstone Academy car

If you have never competed in a sprint before and you are a member of SDCC you can take up the Academy Challenge for 2021?

You need to be a club member and have an MSUK RS Interclub license (about £69).

The club now has an MG ZR 1.4 that we will loan you for up to 3 club sprints during the year. You only pay the entry fee (first one ½ price) and for any body/chassis damage you do to the car. We will even loan you the racing overalls, gloves and helmet you need.

After attending countless sprints and club afternoons at Curborough as a spectator, I was encouraged by fellow club members to enter an event at Curborough in the Academy Car. This car is used to allow entry-level competitors a chance to compete in an organised MSA sprint event - without the added cost of purchasing the necessary safety kit, as this is supplied by the club along with the use of the car.

Leading up to the event – I can’t lie - I was very nervous and apprehensive at the prospect of competing for the first time. Although I had driven the track before in a VW Golf GTI, the novelty of being in a new environment (with a massive crowd in attendance) was a little daunting. Once settled in the car, my nerves built whilst waiting to set off on my first practice run. Even with this in mind, I managed to get off the line without stalling (!) and started my lap cleanly. With that being said, it didn’t go without its drama as partway through my run, I unintentionally placed a wheel on the grass which resulted in me being spat off the track. Admittedly, this did shake me up a little as I did require some assistance to recover the car back to the paddock.

Some of you may know that coming off the track can knock your confidence, but after being given a pep-talk, I decided to get back on the horse and go out for my second practice run and managed to stay on the black stuff. Although it was a very slow lap, it showed me that I was able to stay on the track and record a time.

Following my practice run, I went back out for my first timed run and managed to take 6.5 seconds off my last recorded time. With the final run of the day, I took another couple of seconds off and felt that I had learnt from my day ready for my next event.

I know that without the support from other competitors, family, friends and club officials, I probably wouldn’t have gone back out and enjoyed it so much. I would like to thank you all (especially David Pattison, Cathie and Chris Gwilliam, Chris Machell and all the race officials) for being there, for supporting the club and for making the day possible.

Although I have not been a Club Member for long, I highly recommend competing and being involved in the club. From Breakfast Meets, to Club Afternoons and Sprints, I feel I have made a lot of new friends and thoroughly enjoy the atmosphere that it provides.